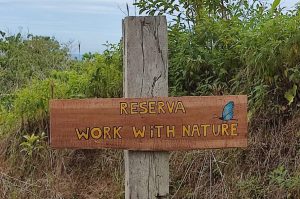 However, due to the growth of Adopt Rainforest and the latest purchase of 65 hectares, the foundation now owns an area of 230 hectares of rainforest that it protects. This is so large that it is not feasible for the project manager to monitor this on a weekly basis in addition to all his other duties. To ensure that the reserve remains well protected we have enlisted the help of two park rangers. It is a job you prefer not to do alone, because you are sometimes several hours walk away from the village.

Dennis and Gian Carlos are two acquaintances of the foundation. Both live with their families in the neighboring village of San Miguel and have been involved from the start of the project. They regularly help with jobs such as the reforestation project and keeping the trails through the reserve clean. Two boys who have been traversing this large area since childhood and know everyone in the area. We are therefore super happy that they want to take on the task as park rangers!

First visit to the reserve

Last week Dennis and Gian Carlos made their first visit to the reserve as rangers. They placed new signs at several strategic points (see photo above). In addition, they performed overdue maintenance on the land boundaries. Each week they visit a different area. When they encounter special animals or plants, of course they try to take a photo or video to share with us. In this video the Green Macaw can be heard. A beautiful rare parrot that is threatened with extinction.

Protection of the reserve

Would you also like to contribute to this or a similar project? If so, please contact us.

What is deforestation anyway? This term is used to describe the process by which trees give way to agriculture and livestock. Deforestation takes place in large numbers every day, especially in the Amazon rainforest. Not a pretty thing! The consequences? Cutting down trees not only means loss of our beautiful nature and biodiversity. It has an effect on the ambient temperature: it rises. This increase is caused by burning trees and because oxygen (O2) gives way to carbon dioxide (CO2) emissions. Trees store a lot of CO2 and this is released during deforestation. The numbers? Don’t be alarmed: around 13 million hectares of forest disappear on Earth every year, according to the FAO. To make it a little more tangible: this equals 18,207,280 football fields. Approximately 34 soccer fields per second! END_OF_DOCUMENT_TOKEN_TO_BE_REPLACED

END_OF_DOCUMENT_TOKEN_TO_BE_REPLACED

High time for biodiversity Did you know that 5% of all species of flora and fauna in the world live and grow in Costa Rica? Also, Costa Rica is in the global top 20 countries with the greatest biodiversity! Are you a real nature lover? Then put Costa Rica on your bucket list. But… before […]

END_OF_DOCUMENT_TOKEN_TO_BE_REPLACED

It’s World Rainforest Day today (June 22)! A day to put our world’s rainforests in the spotlight because it’s mega important to protect them. Do you know which are the largest rainforests in the world? In this blog we will show them to you. We start at spot 10. END_OF_DOCUMENT_TOKEN_TO_BE_REPLACED

END_OF_DOCUMENT_TOKEN_TO_BE_REPLACED

Is it possible to restore the original rainforest in a deforested area where cows have been grazing for years? In Costa Rica at least they accept the challenge. This article tells in short how a Dutch foundation in Costa Rica is trying to transform degraded land back into a fully fledged rainforest. END_OF_DOCUMENT_TOKEN_TO_BE_REPLACED

Did you know… in the wet months the frogs in Costa Rica show themselves more often? They are less prone to drying out because of the wetness and are singing because many species lay their eggs in the rainy season. Earlier we talked about the glass frogs, but there are many more frogs to be seen in this period. END_OF_DOCUMENT_TOKEN_TO_BE_REPLACED

END_OF_DOCUMENT_TOKEN_TO_BE_REPLACED

Costa Rica is known for its beautiful nature, a country with an exceptionally high diversity of plants and animals (one of the highest percentages of biodiversity in the world). A country for the true ecotourist. Over the past twenty years, ecotourism has become increasingly important to Costa Rica. In 2019, there were nearly 3 million tourists in Costa Rica of which 80% are considered ecotourists. END_OF_DOCUMENT_TOKEN_TO_BE_REPLACED