Forty hectares of this is a piece of beautiful rainforest that directly connects to the existing reserve. The 25 hectares that remain is now pasture land, but is an important connection to the Barbilla National Park. We plan to reforest these 25 hectares of meadows early next year. We will be happy to tell you more about this later.

Why is the connection with the national park so important? 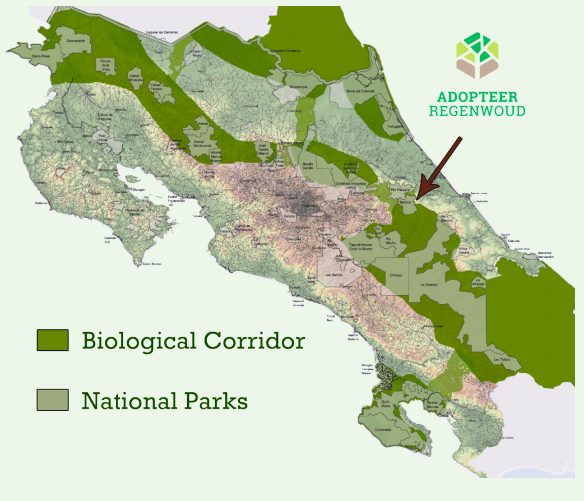 In addition, it is an important area because it is part of an ecological connecting zone from the North to the South of Costa Rica. As long as this important connecting zone is maintained or even expanded, plants and animals can more easily migrate from North to South without major obstacles.
The map to the right clearly shows how this ecological connecting zone runs. It is also clearly visible that the zone in the area of Adopteer Regenwoud is vulnerable. In fact, the strip here is very narrow. By purchasing and protecting more rainforest in this region, the foundation provides a wider connectivity zone which reduces the vulnerability.

It is important to the foundation that the reserve consist of a contiguous piece of forest. It wants to ensure that animals can move freely throughout the area. Animals avoid pastures to move across. This is because of the risks it poses due to little shelter. These same animals are also the ones to disperse the seeds of trees and plants. Almost all seed dispersal in the rainforest is done by animals. So the foundation’s preference is always to select a new plot to be purchased that has rainforest on it and is directly adjacent to the existing reserve.

However, Foundation Adopteer Regenwoud cannot escape the occasional need to purchase a plot where part of the plot has been deforested in the past. In the region where the foundation protects rainforest, forest plots are fragmented by small-scale agriculture and cattle ranching. Thus, there may be a strip of grassland between the current reserve and a new piece of rainforest to be purchased. To ensure that the reserve remains a continuous forest, the foundation is planting a mix of tree species there. This will create a young forest in a period of 5 to 10 years where animals will dare to cross again.

Do you want to know more about how the foundation restores pastures: From pasture to a fully fledged rain forest

Do you want to contribute to our goal? Become a donor!

What is deforestation anyway? This term is used to describe the process by which trees give way to agriculture and livestock. Deforestation takes place in large numbers every day, especially in the Amazon rainforest. Not a pretty thing! The consequences? Cutting down trees not only means loss of our beautiful nature and biodiversity. It has an effect on the ambient temperature: it rises. This increase is caused by burning trees and because oxygen (O2) gives way to carbon dioxide (CO2) emissions. Trees store a lot of CO2 and this is released during deforestation. The numbers? Don’t be alarmed: around 13 million hectares of forest disappear on Earth every year, according to the FAO. To make it a little more tangible: this equals 18,207,280 football fields. Approximately 34 soccer fields per second! END_OF_DOCUMENT_TOKEN_TO_BE_REPLACED

It’s World Rainforest Day today (June 22)! A day to put our world’s rainforests in the spotlight because it’s mega important to protect them. Do you know which are the largest rainforests in the world? In this blog we will show them to you. We start at spot 10. END_OF_DOCUMENT_TOKEN_TO_BE_REPLACED