Did you know… in the wet months the frogs in Costa Rica show themselves more often? They are less prone to drying out because of the wetness and are singing because many species lay their eggs in the rainy season. Earlier we talked about the glass frogs, but there are many more frogs to be seen in this period.

Tree frogs often lay their eggs in or above (temporary) pools of rainwater. The advantage is that these pools are usually free of fish, so there is less chance that the eggs or tadpoles are eaten. During wet nights the males gather around the pools to sing and attract females.

Species from the great genus Craugastor have an even more ingenious way of reproduction to prevent predation (eating their eggs). Most species lay their eggs in small puddles that form on dead leaves or dimples in the ground, without aquatic predators (predators in the water). From the eggs miniature frogs are formed, they skip the whole tadpole step. This is how these frogs deal with the high predation pressure in the rainforest. But it also brings risks: when the little water dries up before the frogs develop, they dry out.

Below an overview of some of the species we regularly see during the night tour in the Work with Nature reserve. 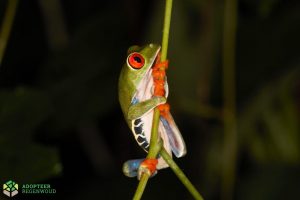 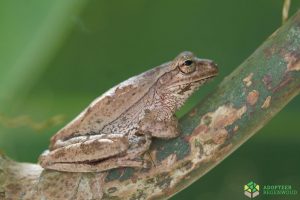 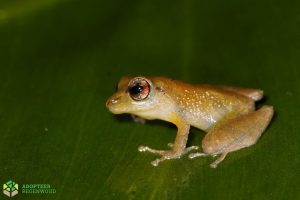 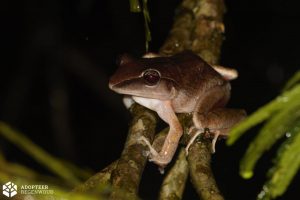 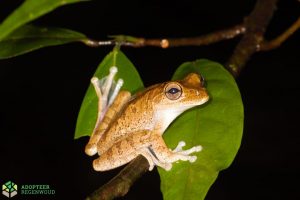 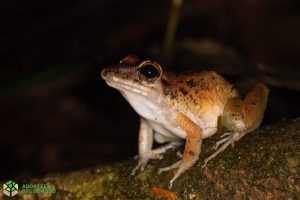 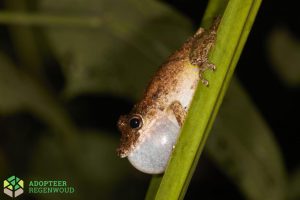 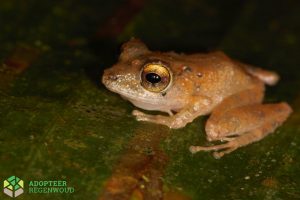 Did you already read our article about glass frogs? Click here

Last summer we were able to open the proverbial champagne bottle again! Despite all external influences, we managed to formalize the purchase of a beautiful and especially strategically important piece of rainforest! It concerns the 9 hectares on which the research center is located. END_OF_DOCUMENT_TOKEN_TO_BE_REPLACED

Is it possible to restore the original rainforest in a deforested area where cows have been grazing for years? In Costa Rica at least they accept the challenge. This article tells in short how a Dutch foundation in Costa Rica is trying to transform degraded land back into a fully fledged rainforest. END_OF_DOCUMENT_TOKEN_TO_BE_REPLACED

Most species are between 7.5 and 13 cm in size. You would almost think it is an out-sized bumblebee! Hummingbirds (Trochilidae) are the smallest birds in the world. They are a family of birds of the order swift-like. The family includes more than 300 species. Most species are found in South America. It is so much fun END_OF_DOCUMENT_TOKEN_TO_BE_REPLACED

END_OF_DOCUMENT_TOKEN_TO_BE_REPLACED

Did you know that 5% of all species of flora and fauna in the world live and grow in Costa Rica? Also, Costa Rica is in the global top 20 countries with the greatest biodiversity! Are you a real nature lover? Then put Costa Rica on your bucket list. But… before you pull your backpack and passport out of the  closet, we want to give you a lesson about biodiversity. Maybe you have what it is, but to refresh your memory we’ll explain it to you in this blog. END_OF_DOCUMENT_TOKEN_TO_BE_REPLACED

END_OF_DOCUMENT_TOKEN_TO_BE_REPLACED

What’s with the fur? Why do sloths sleep so much? This month, the three-fingered sloth is the animal of the month at Adopt Rainforest. And what’s more fun than hearing from one of the founders of Adopt Rainforest some fun facts that you won’t find in a standard biology book. Maarten van der Beek is one of the biologists at Adopt Rainforest and lives on the Work With Nature reserve in Costa Rica. END_OF_DOCUMENT_TOKEN_TO_BE_REPLACED

Costa Rica is known for its beautiful nature, a country with an exceptionally high diversity of plants and animals (one of the highest percentages of biodiversity in the world). A country for the true ecotourist. Over the past twenty years, ecotourism has become increasingly important to Costa Rica. In 2019, there were nearly 3 million tourists in Costa Rica of which 80% are considered ecotourists. END_OF_DOCUMENT_TOKEN_TO_BE_REPLACED

In the Caribbean lowlands of Costa Rica most rain falls in May to August. The fact that it rains is good for all life of course, but can be quite difficult for our biologists in the Work with Nature reserve; the paths become muddy, the laundry doesn’t dry and the project is sometimes briefly inaccessible because rivers are filling up. END_OF_DOCUMENT_TOKEN_TO_BE_REPLACED

END_OF_DOCUMENT_TOKEN_TO_BE_REPLACED

This month chairman Martin and founder Matthijs were at Trees for All’s headquarters to ratify a new cooperation for reforestation of 25 hectares of grassland. One of the largest projects in Costa Rica for the Adopt Rainforest Foundation to date. A total of more than 27,500 trees will be planted. END_OF_DOCUMENT_TOKEN_TO_BE_REPLACED