This month chairman Martin and founder Matthijs were at Trees for All’s headquarters to ratify a new cooperation for reforestation of 25 hectares of grassland. One of the largest projects in Costa Rica for the Adopt Rainforest Foundation to date. A total of more than 27,500 trees will be planted.

The foundation is not doing this alone. Thanks to the support of Trees for All, a team of seven locals from the neighboring Indian reservation will be able to take on the challenge of planting these 27,500 trees. In doing so, Adopt Rainforest not only provides nature restoration but also offers seven families employment and income for at least a year. 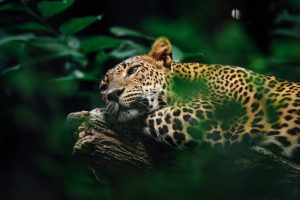 Adopt Rainforest’s mission is to protect 2,000 acres of rainforest. This 2,000-hectare area serves as an important buffer to the nearby Barbilla National Park and the Cabécar Indigenous Reserve. Pressure on the rainforest is well felt in this region. From the inhabited world, deforestation is shifting increasingly toward the National Park and the Indigenous Reserve. Adopt Rainforest aims to ensure that both the National Park and the Indigenous Reserve remain untouched. So that animals, such as the Jaguar for example, can continue to exist here carefree. The reserve is located in a part of the country that is very important as a corridor (connection) for many animals between North and South America. In this regard, it is important that the reserve consists of a continuous stretch of forest so that animals can move freely throughout the forest area. Many animals avoid open areas and meadows when moving. This is because of the risks involved in moving through unsheltered areas. The animals in the rainforest and therefore in our reserve also have an important role in natural forest formation. Almost all seed dispersal in the rainforest is done by animals.

In order to expand the reserve, it is of course important that the new plot is adjacent to the existing reserve. The foundation always prefers to select a new plot to be purchased that already consists of rainforest. However, Adopt Rainforest cannot escape the fact that occasionally it must also purchase a plot where part of the plot has been deforested in the past. In the region where the foundation protects rainforest, forest plots are fragmented by small-scale agriculture and cattle ranching. Thus, there may be a strip of grassland between the current reserve and a new piece of rainforest to be purchased. To ensure that the reserve remains a continuous forest, the foundation plants a mix of tree species there. This will create a young forest within a period of 5 to 10 years where animals dare to cross again. 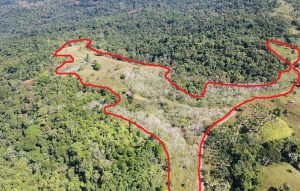 Last year, the foundation was able to expand the protected reserve in Costa Rica with an area of 65 hectares. Forty acres of this is a piece of beautiful rainforest that connects directly to the existing reserve. The 25 acres where there is no rainforest yet is currently pasture land, but is an important connection to the Barbilla National Park. We will now reforest these 25 hectares of pasture land. A total of 27,500 trees will be planted. The tree species have been selected based on their specific growth characteristics. It is important that we create a forest climate again as soon as possible with the trees we plant. This forest climate is a precondition for the growth of the ultimate target species (original tree and plant species from the rainforest). These only grow in a shady environment with the right humidity. The seeds of these target species, such as forest giants, are mainly dispersed from the adjacent rainforest by animals. It is therefore important that these animals (such as; monkeys, birds, rodents) return to the area because the planting of different trees has made it more attractive to them.

In our previous reforestation project of 4 acres of pasture, 14 tree species were eligible. These 14 tree species are indigenous to the region and thus are all native to this area. Because this reforestation project was an experiment to see which tree species would be most suitable for reforestation, we planted all 14 native tree species. For the past three years we have been monitoring these trees with the help of several forestry students. All trees were numbered and measured every 6 months. In this way we gained a good understanding of which trees are doing well in the region, and which trees are not doing as well or are not suitable at all. In the end, we chose to use a mix of the six most successful trees from our reforestation experiment for the reforestation of these 25 acres of pasture that will now be converted. 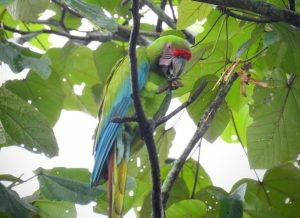 In addition to the six selected tree species, nearly 4,000 Almendro trees will also be planted. This is a species of tree that is slowly disappearing in Costa Rica due to deforestation. This tree is hugely important for the critically endangered Great Green Macaw, abeautiful large green Macaw whose population is under pressure with only 1,000 left in the wild. The Great Green Macaw depends on this particular species of tree to build its nest in. As a foundation, we hope to contribute to the population growth of this beautiful animal.

All saplings are purchased through the nearby Costa Rican Universidad EARTH. A forestry university that owns a tree nursery. We experienced a pleasant cooperation in the previous reforestation project, so we are happy to support EARTH again with the purchase of the saplings.

END_OF_DOCUMENT_TOKEN_TO_BE_REPLACED

Did you know… in the wet months the frogs in Costa Rica show themselves more often? They are less prone to drying out because of the wetness and are singing because many species lay their eggs in the rainy season. Earlier we talked about the glass frogs, but there are many more frogs to be seen in this period. END_OF_DOCUMENT_TOKEN_TO_BE_REPLACED

What is deforestation anyway? This term is used to describe the process by which trees give way to agriculture and livestock. Deforestation takes place in large numbers every day, especially in the Amazon rainforest. Not a pretty thing! The consequences? Cutting down trees not only means loss of our beautiful nature and biodiversity. It has an effect on the ambient temperature: it rises. This increase is caused by burning trees and because oxygen (O2) gives way to carbon dioxide (CO2) emissions. Trees store a lot of CO2 and this is released during deforestation. The numbers? Don’t be alarmed: around 13 million hectares of forest disappear on Earth every year, according to the FAO. To make it a little more tangible: this equals 18,207,280 football fields. Approximately 34 soccer fields per second! END_OF_DOCUMENT_TOKEN_TO_BE_REPLACED

END_OF_DOCUMENT_TOKEN_TO_BE_REPLACED

Is it possible to restore the original rainforest in a deforested area where cows have been grazing for years? In Costa Rica at least they accept the challenge. This article tells in short how a Dutch foundation in Costa Rica is trying to transform degraded land back into a fully fledged rainforest. END_OF_DOCUMENT_TOKEN_TO_BE_REPLACED

Did you know that 5% of all species of flora and fauna in the world live and grow in Costa Rica? Also, Costa Rica is in the global top 20 countries with the greatest biodiversity! Are you a real nature lover? Then put Costa Rica on your bucket list. But… before you pull your backpack and passport out of the  closet, we want to give you a lesson about biodiversity. Maybe you have what it is, but to refresh your memory we’ll explain it to you in this blog. END_OF_DOCUMENT_TOKEN_TO_BE_REPLACED

Costa Rica is known for its beautiful nature, a country with an exceptionally high diversity of plants and animals (one of the highest percentages of biodiversity in the world). A country for the true ecotourist. Over the past twenty years, ecotourism has become increasingly important to Costa Rica. In 2019, there were nearly 3 million tourists in Costa Rica of which 80% are considered ecotourists. END_OF_DOCUMENT_TOKEN_TO_BE_REPLACED