In the Caribbean lowlands of Costa Rica most rain falls in May to August. The fact that it rains is good for all life of course, but can be quite difficult for our biologists in the Work with Nature reserve; the paths become muddy, the laundry doesn’t dry and the project is sometimes briefly inaccessible because rivers are filling up. Are there also advantages to days of rain? Yes, there are! The frogs show themselves!

In part 1 of the photo series about the rainy season you can read all about: the glass frogs.

Glass frogs are a special group of amphibians, the small (2-4 cm) frogs have transparent bellies through which the organs are visible. To make sure their eggs are not eaten by other animals, they lay the egg packets on leaves that grow above fast flowing water. The eggs develop on the leaves and when the tadpoles are big enough they break out of their egg packets and fall into the murky water.
During the day glass frogs hide in vegetation. Only during rainy nights most species can be found singing on leaves above streams. Several species of glass frogs have been found in the foundation’s reserve, one more beautiful and endearing than the other. Below are some of the species, some of which are very poorly resistant to disturbance and pollution. Click on the image to enlarge them. 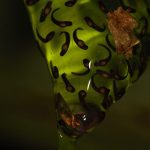 The tadpoles in their individual egg pockets 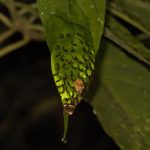 These tadpoles are (almost) fully grown and some of them drip out at the bottom. 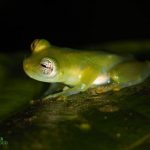 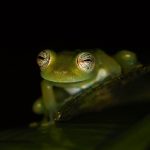 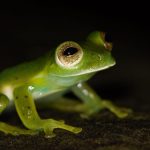 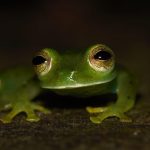 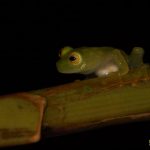 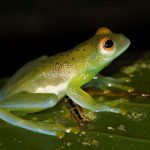 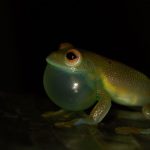 Most species are between 7.5 and 13 cm in size. You would almost think it is an out-sized bumblebee! Hummingbirds (Trochilidae) are the smallest birds in the world. They are a family of birds of the order swift-like. The family includes more than 300 species. Most species are found in South America. It is so much fun END_OF_DOCUMENT_TOKEN_TO_BE_REPLACED

Last summer we were able to open the proverbial champagne bottle again! Despite all external influences, we managed to formalize the purchase of a beautiful and especially strategically important piece of rainforest! It concerns the 9 hectares on which the research center is located. END_OF_DOCUMENT_TOKEN_TO_BE_REPLACED

END_OF_DOCUMENT_TOKEN_TO_BE_REPLACED

Is it possible to restore the original rainforest in a deforested area where cows have been grazing for years? In Costa Rica at least they accept the challenge. This article tells in short how a Dutch foundation in Costa Rica is trying to transform degraded land back into a fully fledged rainforest. END_OF_DOCUMENT_TOKEN_TO_BE_REPLACED

END_OF_DOCUMENT_TOKEN_TO_BE_REPLACED

Did you know… in the wet months the frogs in Costa Rica show themselves more often? They are less prone to drying out because of the wetness and are singing because many species lay their eggs in the rainy season. Earlier we talked about the glass frogs, but there are many more frogs to be seen in this period. END_OF_DOCUMENT_TOKEN_TO_BE_REPLACED

What’s with the fur? Why do sloths sleep so much? This month, the three-fingered sloth is the animal of the month at Adopt Rainforest. And what’s more fun than hearing from one of the founders of Adopt Rainforest some fun facts that you won’t find in a standard biology book. Maarten van der Beek is one of the biologists at Adopt Rainforest and lives on the Work With Nature reserve in Costa Rica. END_OF_DOCUMENT_TOKEN_TO_BE_REPLACED