Most species are between 7.5 and 13 cm in size. You would almost think it is an out-sized bumblebee! Hummingbirds (Trochilidae) are the smallest birds in the world. They are a family of birds of the order swift-like. The family includes more than 300 species. Most species are found in South America. It is so much fun to spot hummingbirds, the smallest bird in the world! Rapidly flying, their wings are more quivering than fluttering, so small and so fast and agile. Read all about this extraordinary bird here. 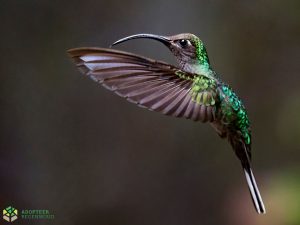 Like a little helicopter, a hummingbird soars through the air. As it does so, it makes a distinctive humming or humming sound. Hence the name “hummingbird” in English. The sound the wings make sounds almost like a piano or violin. They can make different tones. A hummingbird makes this sound in the same way an insect makes the humming sound: namely, by flapping its tiny wings up and down at lightning speed. The bird does this up to 40 times per second. This creates vibrations in the air. And that’s how you hear the buzzing sound. They are called the helicopters among birds because they can hover while flying; they can even fly straight up or down! 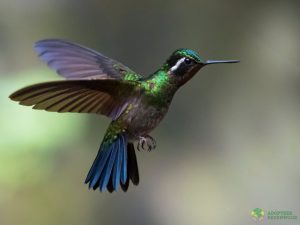 A male hummingbird flies fastest during a dive. He then flies as far as 385 times his own body length in one second. That’s as much as 100 kilometers per hour. So a hummingbird can almost overtake you on the highway. During that top speed, it flaps its wings up and down 15 to 80 times per second.

The hummingbird uses its beak to suck nectar and pollen from flowers. Different species of hummingbirds have different beaks. Some have beaks almost as long as the entire body, about 10 cm long! For example, the sword hummingbird. But others have a beak that is strongly curved downward or one that is curved upward only at the tip. Each beak is specialized on a particular flower shape, so there is no competition between hummingbird species. 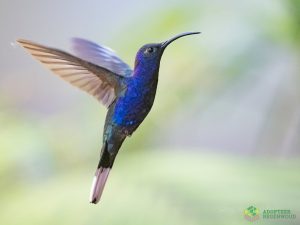 The male hummingbird is variegated, usually metallic green in color, with a brilliant red, blue or emerald green throat color. The female is more inconspicuously colored. Hummingbirds can show and hide their bright colors when necessary.

Large differences in weight occur between species. The smallest, the Bee Hummingbird is only 5 cm tall and weighs 1.8 grams. The hummingbird most common in North America, the Ruby-throated Hummingbird, weighs about 3 grams and measures 7.6 cm. Hummingbirds can live up to 15 years and return to the same place every year. During the colder months, the birds migrate to warmer, more southern regions.

The hummingbird symbolizes the joy of life and the lightness of being. The little bird flies from flower to flower and is always actively seeking the sweetest nectar. It teaches us to seek the beauty in each day, to enjoy in the Here and Now and to look for that which makes you happy and happy.
Hummingbirds in the reserve of Adopt Rainforest

Costa Rica is home to the reserve of the Adopt Rainforest Foundation. This reserve is home to 16 different species of hummingbirds. This is an unprecedented number when you consider that there are 52 species of hummingbirds in all of Costa Rica. A clear indication of how high biodiversity is in this foundation’s rainforest. Would you also like to contribute to the protection of this special nature reserve? Then adopt a piece of rainforest here.

What’s with the fur? Why do sloths sleep so much? This month, the three-fingered sloth is the animal of the month at Adopt Rainforest. And what’s more fun than hearing from one of the founders of Adopt Rainforest some fun facts that you won’t find in a standard biology book. Maarten van der Beek is one of the biologists at Adopt Rainforest and lives on the Work With Nature reserve in Costa Rica. END_OF_DOCUMENT_TOKEN_TO_BE_REPLACED

Is it possible to restore the original rainforest in a deforested area where cows have been grazing for years? In Costa Rica at least they accept the challenge. This article tells in short how a Dutch foundation in Costa Rica is trying to transform degraded land back into a fully fledged rainforest. END_OF_DOCUMENT_TOKEN_TO_BE_REPLACED

END_OF_DOCUMENT_TOKEN_TO_BE_REPLACED

Last summer we were able to open the proverbial champagne bottle again! Despite all external influences, we managed to formalize the purchase of a beautiful and especially strategically important piece of rainforest! It concerns the 9 hectares on which the research center is located. END_OF_DOCUMENT_TOKEN_TO_BE_REPLACED

In the Caribbean lowlands of Costa Rica most rain falls in May to August. The fact that it rains is good for all life of course, but can be quite difficult for our biologists in the Work with Nature reserve; the paths become muddy, the laundry doesn’t dry and the project is sometimes briefly inaccessible because rivers are filling up. END_OF_DOCUMENT_TOKEN_TO_BE_REPLACED

END_OF_DOCUMENT_TOKEN_TO_BE_REPLACED

Did you know… in the wet months the frogs in Costa Rica show themselves more often? They are less prone to drying out because of the wetness and are singing because many species lay their eggs in the rainy season. Earlier we talked about the glass frogs, but there are many more frogs to be seen in this period. END_OF_DOCUMENT_TOKEN_TO_BE_REPLACED