More than 11 years ago, the founders of the Adopt Rainforest foundation visited this beautiful area for the first time. What a beautiful area with giant big trees, several rivers and an enormous biodiversity of plants and animals. Yet there was something they both noticed immediately. There were no monkeys at all.

By speaking to many local people, it soon became clear where the monkeys had gone. Due to overhunting and the fragmentation of many forest plots, the monkeys had disappeared from this area. It soon became clear to the founders of the foundation that it should be one of the foundation’s goals to get the monkeys back in this disturbed area. Important primates like the howler and capuchin monkey belong in these tropical lowland rain forests. Besides being beautiful animals to see, they also play an important role in spreading seeds for various tree species. 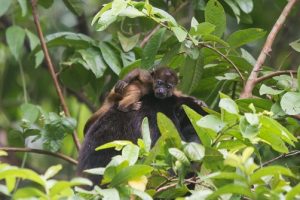 After more than 11 years of purchasing several pieces of rainforest, Adopt Rainforest is now protecting 224 hectares of rainforest. Besides protecting this fragile ecosystem, we actively involve the local population in this project. In this way we create more and more awareness about how important it is to protect nature. And we hope to reduce illegal logging and hunting.

The activities of the past years have led to the fact that a few years ago a howler monkey male came to live in our area for the first time. Probably a male who was rejected from a group of howler monkeys in another area. After this male spent almost two years waking up our project managers and the students present, his roaring had an effect. In fact, a female howler monkey has come over from another area. But this is not where the fantastic news ends, because last week our biologist on the ground took this photo! The female howler monkey is carrying a baby!!!

Want to support this good cause? Become a contributor!

What’s with the fur? Why do sloths sleep so much? This month, the three-fingered sloth is the animal of the month at Adopt Rainforest. And what’s more fun than hearing from one of the founders of Adopt Rainforest some fun facts that you won’t find in a standard biology book. Maarten van der Beek is one of the biologists at Adopt Rainforest and lives on the Work With Nature reserve in Costa Rica. END_OF_DOCUMENT_TOKEN_TO_BE_REPLACED

Did you know that 5% of all species of flora and fauna in the world live and grow in Costa Rica? Also, Costa Rica is in the global top 20 countries with the greatest biodiversity! Are you a real nature lover? Then put Costa Rica on your bucket list. But… before you pull your backpack and passport out of the  closet, we want to give you a lesson about biodiversity. Maybe you have what it is, but to refresh your memory we’ll explain it to you in this blog. END_OF_DOCUMENT_TOKEN_TO_BE_REPLACED